This week BBC Four broadcast Dan Cruickshank: Resurrecting History: Warsaw, a fascinating interweaving of the presenter’s recollections of his family life from the age of 7 in the Polish city of Warsaw, where his father had been posted as a journalist for the left-wing British newspaper the Daily Worker.

In the programme Dan returns to Warsaw for the first time since he left as a child. He explores his memories of the capital and those of its inhabitants who were faced with a city in ruins in the aftermath of World War II when less than a sixth of the city survived bombardment by the German Luftwaffe and the Soviet military.

Dan looks at the physical reconstruction of the city and the ideological influences on this process, drawing out the local Polish efforts to restore the former glory of Warsaw and the impact of Soviet hegemony on the cityscape. He also combines archival sources, historic paintings and photographs, and architectural surveys of prominent buildings to look at how the city has been envisioned over time from the 18th century to the present day.

I always find Dan Cruickshank’s programmes immensely interesting, not least for his engaging style of presentation, but also the combining of many of my own interest areas in his programme content: the Arts, social history and the study of the built environment.

Many of the projects I undertake at historytrace involve the study of historic family locations and in particular former cityscapes: from the close analysis of old family photographs in order to ascertain where they were taken; to the search for residential addresses and streets which have been destroyed or renamed. Having spent my childhood alongside a father who was an architect, his interest in analysing architectural styles and modifications to buildings rubbed off on me too.

Dan’s programme brings to the fore another particular interest I share: the effect of national historical changes on people and places during the 20th century, in particular during the early postwar decades in Poland. There are a number of interesting case studies of post-war reconstruction in other Polish cities and towns which suffered greatly during the World War II. These highlight varying localised approaches to the problems of reconstruction and the ideology of re-visioning nationalist, cultural and architectural values in Poland’s landscape.

For example the Baltic port city of Gdańsk or Danzig where the historic old town had been largely destroyed during the World War II. During the 1950s and 1960s reconstruction was politically motivated to create a cityscape which drew on classical Dutch, Italian and French architectural styles, eschewing Germanic architecture, thus removing traces of the city’s Germanic heritage and creating a visual caesura obscurring the city’s long history of Teutonic connections which began in the 14th century.

Another example is the city of Poznań which had a long history of alternating nationality. Formerly Polish until 1793 when the city known in German as Posen came under the control of Prussia at the Second Partition of Poland, and following World War I Poznań once more became a Polish city. Poznań was in turmoil by the end of World War II as a stronghold of the German forces against the Red Army with over half the city in ruins. Postwar reconstruction for its inhabitants was set against a highly politicised backdrop with the 1956 Poznań Uprising when the mass demonstration of workers against the government’s imposed working conditions was met with violent repression.

Glogau, now Głogów, was a key Prussian German city which had also suffered serious bombardment as a Nazi government stronghold during World War II. Besieged for six weeks by the Soviets it was 98% destroyed by the end of the war. Postwar this region was ceded to Poland and its German speaking residents evicted. Repopulated by Polish settlers this town was not redeveloped on a large scale until the late 1960s. Głogów in the 18th century had been home to a sizeable and prosperous Jewish community with a longstanding presence in the city. With Glogau in ruins, it was not only the Austro-Silesian heritage of the town which had been destroyed, its Prussian built heritage and former German inhabitants removed, but also the material heritage of its historic Jewish community and former Jewish inhabitants no longer had a presence in the town.

The last city I would like to draw attention to here is the Prussian German city of Breslau, now Wrocław. A city which over the course of its history has had many identities including: Austro-Silesian, Polish and Prussian German as the fifth largest city in the German Empire at its foundation in 1871. Like Poznań and Głogów, as a Nazi stronghold Breslau was heavily besieged in 1945 by Soviet forces, leaving nearly three quarters of the city in ruins at the end of the war. In 1945 Wrocław became Polish again, faced with painstaking demolision to clear its ruins, which was carried out by men, women and children, as was the case in Warsaw described by Dan Cruickshank’s interviewee and shown in the programme’s footage.

Demolition and reconstruction were not only infrastructural necessities in postwar Poland but also an economic means to an end for families living among the rubble. Small amounts of money could be earned from salvage work and ironically bricks salvaged from Wrocław were sent to Warsaw where the government prioritised the rebuilding of the Poland’s capital city. Wrocław’s old town was also rebuilt like many other Polish cities without reference to its former 19th century Germanic architecture. As in Głogów and across Poland, whilst some urban areas lay cleared and not rebuilt into the late 1960s and 1970s, large parts of the flattened towns were repopulated with prefabricated concrete apartment blocks.

The caesura in architectural continuity within Polish towns and cities is paralleled amongst the populace. During and immediately following the war years the residents of those cities shifted: displaced, removed and replaced. Firstly the persecution of Jewish residents caused migration from former homes, forced deportation and finally the destruction of Polish Jewry during the Nazi Holocaust. Towards the end of war and in the months following a new wave of displacement altered Poland’s city populations as ethnic Germans were evicted from former Prussian towns and cities, replaced by Polish people following their removal from former Polish territories now annexed by the Soviets east of the Curzon Line in 1945.

Programme Details:
“Dan Cruickshank: Resurrecting History: Warsaw”, first shown at 9pm, 2 Dec 2015, BBC Four.
This programme will be available for a few weeks after its broadcast date on the BBC iPlayer. 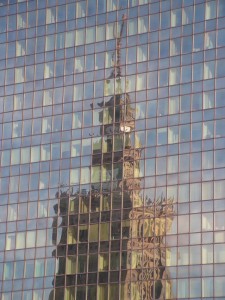 If your family history played out in a Polish city which suffered much destruction during World War II, as a result of postwar reconstruction it can be difficult to get a sense of the former cityscape in which forebears lived, not least to locate former addresses.

Historytrace can help you to envisage the places where your ancestors lived in areas corresponding to present day Poland, through maps, photographs and a range of historical sources.

If you would find this service helpful then do get in touch using the Contact page of this website.

Reflection of The Palace of Culture and Science, Warsaw