Family history is primarily bound up in the lives of our forebears, their experiences, their stories, their surroundings, but also their possessions. I was recently pondering the few artefacts I have which formerly belonged to relatives now passed on. Objects which offer a unique window onto the social and economic history of their former owners from a specifically generational and gendered perspective. 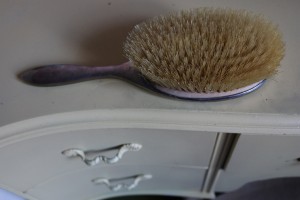 When my paternal grandma passed on I ended up being given some of her bedroom furniture, notably a sturdy but shapely dressing table, or vanity, dating from the 1930s. Some years later following the death of my great aunt her belongings were sold off but a few items deemed relatively worthless were distributed amongst family members. I was given a silver plated brush set which no doubt had been kept upon her dressing table for her toilette. Furthermore some fifty years after the death of my maternal grandmother I was recently unexpectedly given some pretty green glassware which would have adorned her dressing table.

None of these items had been bequeathed specifically to me. Their original owners had not sought me out as a worthy heir, had not particularly singled out those possessions above others to be retained by specific descendants. The value of these items is nominal and their contemporary use limited, yet it is these specific artefacts which connect me to small intimate aspects of the former everyday lives of these three women in a way that nothing else does.

Although the three women lived during the 1930s within a few miles of each other, between Stratford and Romford, east of London, they came from different family backgrounds. All had forebears who had migrated to live in London’s urban metropolis at various times during the 19th century. From Lancashire and Lincolnshire, East Anglia, as well as rural Essex nearby. My Grandma’s father worked as a solicitor and my great aunt’s father as a dentist, whereas my maternal grandmother’s side of the family was more working class.

I do not know when these objects were bought or given to these women. I like to think that they may have been wedding gifts. The pieces of furniture were manufactured by Wrighton, a furniture company local to where my grandma lived. Perhaps she had visited their showroom to select the pieces, directed the delivery men as they installed them in the bedroom, carefully lining the drawers before arranging their new contents. They still have that ingrained smell of moth balls and soap. How many times did she sit at the mirror seeing her reflection and surroundings whilst pondering the passing of time or the future? What treasures did my other grandmother store in her glass containers, what did she think about as she dusted them and polished underneath? Had she chosen their design, was green her favourite colour? Did my great aunt sit at a similar dressing table as she brushed her hair and checked her lipstick?

The elder two women were born in the first decade of the 20th century, the youngest in 1922. With almost a generation between them they grew up as British society and women’s roles were shifting through World War I and the interwar years. They married during the 1930s and during World War II. Although their generation of women still had defined roles in the home, alongside paid employment and war work, they belonged to a generation for whom the outward markers and rituals of femininity and good housekeeping still had a direct bearing on their social standing. It was a generation for whom it mattered if your front step was swept and polished, whether you did it for yourself or someone else did it for you. These women belonged to a generation which was expected to keep house, work, tend the family and also somehow find time to sit before their dressing table to powder their nose. Although my grandma from West Ham was quick to point out that her family’s cleaner had come from East Ham where my other grandmother lived.

I’m not sure what my grandma would now make of the present state of her dressing table. It has had several dubiously coloured resprays, no longer accompanied by its mirror, its drawers crammed to the brim with the paraphernalia of my daughter’s interests. Whereas the brushes and glassware are stored safely out of the way of dust and damp, where they can be neither used nor broken. And whilst I ponder the very obvious differences between their lives and those of mine and my daughter’s generations, I also ponder which of my possessions I expect to outlive me and whether there is anything that I would bequeath to any descendants. Would anything encapsulate my everyday in such a personal way? My grandma’s modest dressing table and the other toilette articles epitomise for me something between “utilitarian pieces to serve our most basic domestic needs” and “luxury objects” as described by Jane Adlin. For me, set within the context of my female forebears’ lives, the objects tell their own public and private stories of “social class and status”. Could something I leave behind be as evocative for my descendants?

Historytrace specialises in researching Jewish and non-Jewish family histories which originate in Europe. How evocative are the heirlooms you have inherited? If our services could help you look afresh at your ancestors’ lives to elucidate their everyday experiences and surroundings do get in touch using the Contact page of this website.

You have been reading the historytracings blogpost “The Dressing Table – Thursday Thoughts”. Copyright text and image www.historytrace.co.uk, 2015.