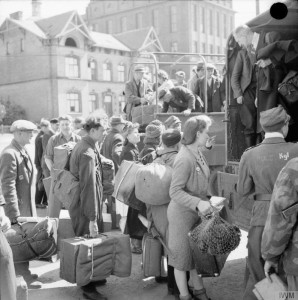 For people who are searching for information about the fate of family members in Europe during World War II and the immediate postwar years it is now possible to access the International Tracing Service Digital Archive (ITS) at the Wiener Library for the Study of the Holocaust and Genocide, Russell Square, London.

The ITS Archive, physically located in Bad Arolson, Germany, contains over 100 million pages of Holocaust-era documents about the fate of over 17.5 million people who were displaced, imprisoned and subjected to forced labour during and after World War II.

The ITS Archive was built upon foundations laid in 1943 by the British Red Cross as a Tracing Bureau aimed at assisting the millions of displaced and missing persons to trace their families and be traced in the aftermath of WWII. By 1946 this humanitarian organisation had moved to Bad Arolsen in Hesse, Germany, which was central to the four occupation zones. From 1948 onwards the information held at the International Tracing Service Archive was only available there for consultation. In recent years seven partner institutions have become copyholders, with an updated digital copy of the ITS Archive distributed in November 2015.

In London, the Wiener Library now offers access by appointment to those wishing to “examine documents related to their own fate or to that of family members during World War II”. Those who are interested in carrying out historical research within the collections can arrange to consult the digital archive in the Reading Room. Limited enquiries regarding specific individuals can be made and the reader should consult the Wiener Library guidelines here. However, indepth enquiries should be directed to the ITS Archive at Bad Arolson which has a dedicated service for international enquiries and the necessary expertise to deal with detailed requests and high volumes of enquiries.

In the immediate period following the end of WWII there was a massive movement of Jewish and non-Jewish displaced persons within the European countries affected by the war and occupations. Many were survivors of deportation, there were those who had been newly liberated from concentration, internment and labour camps across German occupied territories and beyond, as well as people who had been in hiding or fighting as partisans. The displaced persons gathered in DP camps came from very varied backgrounds and former nations, having survived in many different circumstances and with particular needs and wishes. Some had survived Nazi death marches like those which had moved the inmates of Auschwitz ahead of the advancing Soviet Red Army. Others had been liberated from labour camps and became stuck in DP camps with no paperwork and difficulties trying to get word back to any surviving family in their former homes at a time when inter-national communication was unreliable and often depended on personal contacts.

Some displaced people tried to return to their homes immediately, others found refuge in camps whilst their health improved, awaiting news or paperwork. Many did not wish to return to their former homes which had been sites of victimisation and where they were at risk of further anti-semitism. Many waited not just months but years before travel documentation was obtained and clear passage could be found.

The task which faced the United Nations Relief and Rehabilitation Administration (UNRRA) at the end of the war was formidable. Between May and December 1945 UNRRA were able to repatriate more than six million displaced persons. However between 1945 and 1952 there were still more than 250,000 Jewish displaced persons living in camps and centres in Germany, Austria, and Italy. For many, a new permanent home only came after the United States Congress passed the Displaced Persons Act of 1948 which loosened immigration restrictions and the new State of Israel was recognised. As a result emigration resolved the crisis with over 80,000 Jewish DPs going to the United States of America, 136,000 to Israel and 20,000 to other countries.

During this period there was also the added movement of non-Jewish survivors, refugees and displaced persons who fled westwards from former German territories which had been occupied by Soviet forces. Ethnic Germans displaced from former Prussian towns and cities such as Breslau, renamed as Wrocław in Poland, which had been occupied by the Soviets and was subsequently repopulated by Polish settlers themselves displaced from eastern territories ceded to the Soviet Union west of the Curzon Line. Movement to the Allied occupied zones of Germany continued even after the formation of the Deutsche Demokratische Republik in 1949 when the border between East and West Germany was consolidated. People found their way to displaced person camps on the western side of the border from which they slowly dispersed to find new homes. Following the relaxation in 1950 of legislation controlling emigration which had sought to prevent the escape of culpable National Socialists and war criminals, many headed for a port city from which they could migrate to America, Australia or other destinations.

Besides the International Tracing Service Archive there are other sources of information about displaced persons and survivors of World War II available online and at archives in the USA such as the United States Holocaust Memoral Museum and Yad Vashem. A very comprehensive database online is Jewishgen’s Holocaust Database which comprises 190 data sets with 2.7 million entries. This collection of records includes for example the Pinkas HaNitzolim Volumes I and II Registers of Survivors published in 1945 in Israel combining 166 different lists of Jewish survivors rescued in various European countries; also specific lists such as the Displaced Persons from Bergen-Belsen to Sweden regarding the 1,600 DPs of various nationalities from the Bergen-Belsen Camp who found refuge in Sweden in 1945; and the Aufbau database compiled from lists of Jewish Holocaust survivors located in Europe published in the New York German-language newspaper Aufbau between 1944 and 1946.

Do you have family members who were displaced in Europe during World War II and the immediate postwar period?

Historytrace can help you to research their lives using displaced person and immigration records in order to understand events that occurred and personal experiences during the 1940s and 1950s, as well as following emigration or return to former homes and communities. Do get in touch using the Contact page of this website if our services could help you trace displaced persons within your family.