The Study of Given Names Within Jewish Family History Research 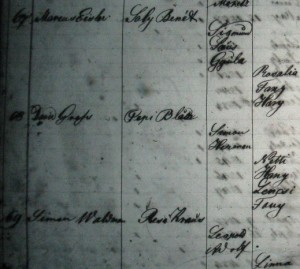 The study of given names within Jewish family history research quickly provides an answer to that Shakespearean query: “What’s in a name?” The answer being many things, including national, cultural and linguistic identity, heritage and context. In this historytracings blogpost we continue our series on researching your own Jewish family history by exploring one set of vital information about an ancestor – their given names.

Our previous blogpost Must Be Out There Somewhere – People Tracing for Jewish Family History Research explored using people tracing to search for missing ancestors and living individuals as part of Jewish family history research.

More Than Meets the Eye

Have you ever googled yourself and found that you are one of a significant number of people called by the same given name and surname? For most of us this is probably the case. So too with our ancestors. It is worth bearing in mind that although you may have found your ancestor in the historical sources by name and perhaps also by date and place of birth, nationality or occupation, there could also potentially have been other individuals who shared names and personal details with your ancestor. If you find that there is more than one contender for your ancestor in the sources, it may be necessary to go into some detail with those alternative individuals in order to distinguish between them, so as not to bark up the wrong ancestral tree. However, once you have truly found your ancestor by name, both their given name and surname can offer up specific details about your family’s heritage.

Given the frequent plant analogies used when talking about family history, describing ancestral networks as branches of the family tree and the search for one’s roots, I was recently interested to watch a programme on the precedential botanical work of Carl Linnaeus for the standardisation of plant names. The presenter Timothy Walker reflected that within Botany “without permanent names there can be no permanence of knowledge”. On the contrary within Jewish family history research one typically expects to find variations and diversity of names, but this generally adds to knowledge about ancestors rather than detracting from it.

What’s in a Name?

An ancestor’s names, their given names and family name or surname, are generally what primarily identify that specific individual in historical sources. A forebear’s names can also help to distinguish them from other individuals. Although names alone are not always definitive enough. A person’s names give them at first glance an identity behind which lie multiple strands of family heritage, shedding light on their national, regional or ancestral identity, revealing inflections of language use, family hereditary naming traditions and traces of migration between regions, countries and language zones.

There are many fascinating insights an individual’s given names can provide and it is quite common in fact for an ancestor to have gone by several names during the course of their lifetime. A comparison of historical sources from birth to death can reveal a surprising number of variations, different spellings, nicknames, alternative names, translated names and name changes. This is particularly the case where an ancestor migrated between countries and languages zones: from one European country to another, or to an English speaking country; to the other side of the world to North America; or to the southern hemisphere.

Multiple and sometimes conflicting names for an ancestor may be frustrating and keep your family history detective work on its toes. However, each variant form of an ancestor’s names may also highlight subtle differences which tell you a lot about your ancestor’s personal experiences and surroundings at different stages of their lives. Names can reveal how they were known by close relatives within the family group, addressed by the authorities, and regarded within business contexts.

The personal given names of an ancestor may be names that you are already familiar with. As in families of other cultural and national backgrounds, naming offspring after or for other family members is also part of Jewish naming tradition. Members of the next generation can be given the name of a deceased family member, although it should be noted that this is not always exclusively the case. One benefit of this general rule is that it can pinpoint an approximate range of years for the death of the namesake, a deceased grandparent for example, if their name becomes visible as the given name of a newborn grandchild. It can also tentatively point to connections between families where trying to ascertain mutual grandparentage.

Depending on the country where your ancestor was born and the type of historical sources available, you may have access to Jewish community records or civil vital documents, or both. Within birth records you may find an ancestor’s Hebrew given name recorded in Hebrew or Yiddish. Hebrew names given for ritual purposes are often also recorded in the patronymic form ben “son of” or bat “daughter of” followed by the father’s given name. Alternatively depending on the period just a given name might be recorded in the national language. For example within the Austrian Empire, this might have been a German or Hungarian given name. Or if your ancestor lived within the Russian Empire there may be parallel birth records in Russian and Hebrew for example.

According to the type of document you have available, the historical period in which it was issued and the nationality or the location your forebear lived in at the time, given names will be recorded in the official or regionally prevalent language of that place, a local dialect or depending on the type of source and time frame even in Latin. For example, in some parts of the former Russian Empire ancestors’ given names may reflect former regional languages and dialects, as well as local naming conventions, such as the use of double given names unconnected with any patronymic names. The influence of the politicisation of Jewish society and naming traditions within the Russian Empire can be explored further through the eminent research of Alexander Beider.

On paper your ancestor may have predominately gone by a commonly used given name which varies subtly according to their location and stage of life, so gather as many different sources for your ancestor’s names as you can. They may appear under variously spelled versions of their given name according to the levels of literacy of the persons stating and recording the name. They may also have used a shortened name or an opaque nickname. Many are the migrants who arrived in the USA under the name Zeidel meaning grandfather in Yiddish. Fortunately, many ancestors often simply took a translated version of their original given name when they changed language zones. However some ancestors completely changed their given name upon immigration to an English, Spanish or Portuguese speaking country. Exploring your ancestor’s historical appearance on paper may help you trace these shifts within your ancestor’s official documentation prior to, during and after immigration.

Some ancestor’s names will of course tell more about their lives than others, but evidence of historical and political shifts and turns in the lives of many ancestors can be visible in their given names alone. Notable examples come from the region of present day Slovakia, among the generation born around the time of the 1848 Hungarian Revolution. Evidenced for example in the various given names used by the dozen or so men known as Vilmos Schwarcz who originated from nearby villages in Pozsony county, Hungary, now in Slovakia. Born within a decade or two of each other during the first half of the 19th century, the historical sources record their given names, starting with their Hebrew name Zev meaning wolf. Known during their childhood as Wolf and Wolfgang; germanicised further as Wilhelm prior to the shift in Hungarian society which magyarised their given name as Vilmos or Farkas meaning wolf in Hungarian. Altering further upon emigration: in English speaking countries anglicised as William, abbreviated as Will or Bill; and known as Viliam in Slovak, and Vilém in Czech.

A name is indeed a name but don’t just take them at face value. Explore what they can tell you about each stage of the lives and times of all your ancestors. We will continue our exploration of names in our next historytracings blogpost called “What’s in a Surname? RYO #7” in which we will look at the study of surnames within Jewish family history research.

Historytrace specialises in researching Jewish and non-Jewish family histories which originate in Europe and in particular where there was family migration between European countries and emigration away from the European continent.

Our expertise can help you research your family history and the history of your family names. Perhaps your ancestor changed their family name or discrepancies in family names have made it difficult to track family members. If our services could help you explore your family names in more detail do get in touch using the Contact page of this website.

You have been reading the historytracings blogpost “What’s in a Name? The Study of Given Names Within Jewish Family History Research – RYO #6”.