The Study of Surnames Within Jewish Family History Research 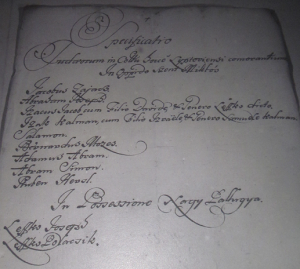 Like the study of given names, the study of surnames within Jewish family history research quickly provides even more answers to that Shakespearean query: “What’s in a name?” Surnames can perhaps be even more revealing than given names. In this historytracings blogpost we continue our series on researching your own Jewish family history by exploring that other set of vital information about an ancestor – their surname.

Our previous blogpost What’s in a Name? RYO #6 – The Study of Given Names Within Jewish Family History Research explored how your ancestors’ given names can add to your knowledge of your family heritage.

What does a surname or family name say about your family heritage? Each family name in your ancestry provides another strand of your family’s cultural heritage. If your ancestors migrated from former German, Austrian, Polish or Russian parts of Europe the family name they used during the 19th century may give clues as to their linguistic, national and cultural backgrounds, and more specifically than that, certain family names can link family ancestry to particular geographical regions or settlements and occupations or ritual community roles.

A pivotal historical moment for Jewish families in Central Europe came in 1887 when state regulation issued across the Austrian Empire by Habsburg Emperor Joseph II required Jewish residents to adopt German given names and hereditary family names or surnames, to replace the practice of using patronymics to distinguish individuals. Legislation was rolled out across Austria, Bohemia, Moravia, and Hungary, and similar regulation was subsequently issued within neighbouring countries. The Kingdom of Prussia followed suit beginning with Silesia, Breslau and Liegnitz. In former Polish provinces annexed by Prussia in 1793 German names were adopted, in some cases assigned by Prussian clerks following the naming legislation of 1797. In West Prussia naming regulations were issued in 1812 and in the province of Posen this regulation came into force as late as 1833. In the former Polish provinces annexed into Prussia in 1795 German family names were adopted from 1797. In 1812 Prussian areas not occupied by Napoleon brought in naming regulation and Jewish residents in the rest of Prussia adopted fixed surnames by 1845. In 1808 Napoleon’s territories west of the Rhine took up naming regulation, with other parts of the former Holy Roman Empire following suit by 1852. Within the Russian Empire’s Pale of Settlement the naming law of 1804 made the Jewish authorities responsible for the law’s implementation, and naming legislation was adopted within the rest of the Russian Empire in 1821.

In former German, Austrian, Polish and Russian regions the adoption of a fixed hereditary surname by Jewish residents marked a decisive point in the history of each family. Outwardly it was a moment from which point onwards they could be distinctly traced for taxation purposes. The significance of that moment for the families themselves would have varied: perhaps it hardly registered if they had already been using a fixed surname for a generation or more; or perhaps this was a proud moment when they willingly asserted a new identity and nomenclature. Instead they may have resented their newly imposed identity which overrode valued community naming traditions whilst imposing the cultural and linguistic hegemony of the nation state.

This moment also creates a caesura for family descendants when tracing one’s ancestry back though the generations before and after the adoption of fixed surnames. Where historical records exist from this period it is not always possible to identify forebears either side of this moment distinguish in inhabitant records, sometimes continuity is broken and only hypotheses can be drawn.

A close study of contemporary sources, in particular taxation censuses prior to and following naming regulation in the locations where family lived around the time, show however in more cases than one would perhaps expect that surname use had already developed beyond patronymic names in some places in the decades prior to naming legislation. This practice varied greatly from place to place and was clearly dependent on many internal and external factors. Historical records also flag up the fact that some locations were slow to usher in the naming requirements after regulation began.

What’s Behind a Surname?

Fortunately the variety of individual circumstances of Jewish family name appropriation in many different settings within Europe means that within your ancestry there should be cases where ancestral surnames was not simply randomly selected titles. For the first generation which took on a fixed family name to be inherited subsequently by descendants in many cases that surname was a carefully chosen surname which already in some cases had an identifiable association with their family.

European Jewish surnames are generally derived from words which have a concrete semantic meaning in their language of origin. There are several identifiable categories of fixed family surname which were adopted. One category is patronymic surnames based on the name of a male ancestor typically the father, or matronymic surnames based on the given name of the mother. Patronymic variations also resulted in family names in the Polish and Russian languages which added the ending -vitz or -wich and variant suffixes, meaning “belonging to” or “child of” followed by the father’s given name, also the suffix -ski and variations such as -sky and other spellings. In the German language suffixes such as -mann – or -sohn were also used in this way.

Another prevalent surname category was occupations and titles based on ritual roles within the Jewish community. These types of surname are particularly evident in Jewish settlements large enough at the time to have a developed internal community structure. Where an occupational title was taken it was generally the case that the generation which adopted the surname carried out that work, or that a close earlier generation had done so and the family was already using the occupational title as a distinguishing family name.

A large number of surnames taken derived from place name associations. Such surnames often denoted a place from which the family had migrated and with which they had formerly been associated. This was prevalent in many locations within Europe. Particularly in northern Hungary, now Slovakia, to which migrants had recently arrived from Bohemia and Moravia to the west and Galicia to the north around the time of the naming legislation. Popular also in German language zones and areas where the use of Yiddish was prevalent were compound surnames based on topographical features and names based on natural elements.

Where families already used a fixed surname in the generations before naming regulation generally they were allowed to retain this name. There were also cases of derogatory surnames being imposed by the authorities although this was not ubiquitous. In addition regionally common surnames used by the surrounding populace were also adopted by Jewish families.

Another interesting feature of the study of surnames is the distribution of names and their variants. The decades around the introduction of Jewish naming legislation in Central and Eastern Europe was also a time of great inter-regional migration. As specific surnames become evident in contemporary historical records, both the appropriation of surnames and the spread of family groups distributing themselves and their surnames become visible. Of course not all instances of a surname point to related individuals, however it is can be useful to compare the specific use of surnames across regions, which can also throw up unexpected connections.

Variation on a Themes

So much hangs on a name. It is often the vital key to finding an ancestor in historical records. Names can reveal and names can hide. If a family name is an uncommon one this can sometimes make it easier to pinpoint ancestors and link to other potential family members. Alternatively difficulties with obscure spellings can produce a multitude of variants which make identification difficult. If you have a particularly common ancestral surname difficulties arise trying to distinguish ancestors amongst other contenders of the same names. Spelling differences in surnames with a common root are also evident over time and point to various causes: literacy levels and the processes transliteration, translation and transcription.

Furthermore families may have made surname changes during the 19th and 20th centuries, engendered by political changes in national identity of home regions, countries and individuals. For example in late 19th century Hungary magyarisation saw politicised changes to given and family names. Within the Russian Empire so too russification also prompted adjustments to family names. Name changes can also be found in the country of final destination for migrant families. For example in the English speaking world the anglicisation or americanisation of given names and family names sometimes shows a link between former and final family names, but sometimes no link at all. What is behind a family surname is intrinsically linked to the context of your ancestors’ lives, in both time and place.

Historytrace specialises in researching Jewish and non-Jewish family histories which originate in Europe and in particular where there was family migration between European countries and emigration away from the European continent.

Our expertise can help you research your family history and the history of your family names. Perhaps your ancestor changed their family name or discrepancies in family names has made it difficult to track family members. If our services could help you explore your family names in more detail do get in touch using the Contact page of this website.

You have been reading the historytracings blogpost “What’s in a Surname? RYO #7 The Study of Surnames Within Jewish Family History Research”. Copyright text www.historytrace.co.uk, 2015.